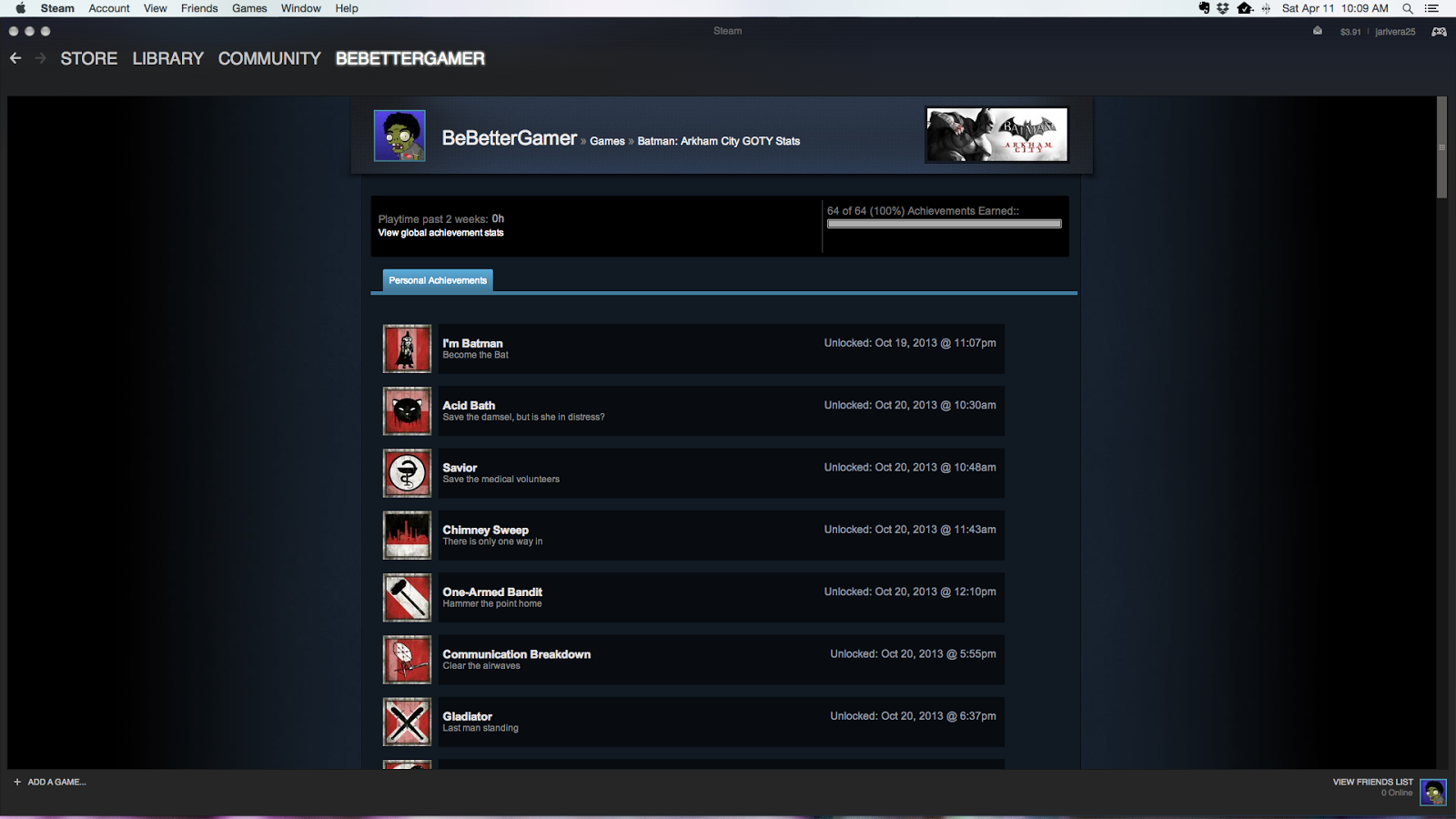 I've written a lot this week about trying to bring my Steam game completion average percentage up before the annual Summer Sale. There's no set number I wish to reach; I'll be happy if I raise it by one or two percent, honestly.

So far in the two nights since I've started working towards this goal my Steam percentage has gone down by one percent. It's complicated.

Although I'm still early in this journey, I'm already thinking about what may come next. Let's say, a week from now I've still manage to play some Steam games every night, and my percentage has gone up. If I can keep that momentum going until the Summer Sale, surely I can continue afterwards right?

So what's the end goal? To play ALL my Steam games? To get all my Steam achievements?

I finally realized that if you hover your mouse over the achievements amount on your profile page, it tells you it pulls that number from "x" amount of games where you have obtained achievements.

Is it possible to have a high or perfect achievement rating across all games I own that have them?

Is it even worth it?


I've been here before


The Xbox 360 was the birth of the achievement score. Finally, I thought, a list that tells me if I've completed a game 100%. Before then I only beat a game or 100% it on my own without a gamerscore. HOW DID I MANAGE!?!

I was a fan of achievements. There's something about having a visual representation of your gaming accomplishments you can show off that's, at least for me, satisfying.

It felt like my hours were being represented. Not only that but my skill. What intrigued me the most about achievements was they weren't all story based. Sure you had (and still have) achievements that unlocked from merely completing the game, but the ones I gravitated to the most were the ones that challenge you to complete it on a more difficulty setting, or accomplish a high score, or daring feat within the game.

At first I was obsessed with achievements, and used it as a way to judge if I'm playing my games or not. If I didn't have any or very little achievements on a game, I'd try to play it more so I didn't feel I was neglecting it.

After a while, it became very obvious that achievements didn't tell the whole story. Some games, it was a little too easy to 100%. Some games, like Gears of War, offered ridiculously time consuming achievements that only the most dedicated could ever get. Even games I felt like I was passionate about and willing to invest the time in, had achievements that were near impossible due to their difficulty, or, finding the time to actually do them.

Also when you go to sites like Trueachievements.com, and see all the top achievement hunters with scores in the hundreds of thousands, and you've barely broken past 10,000, it can get kind of discouraging.

After a few years, I kind of gave up on my achievement hunting quest. Mainly because I was buying games too fast to even play them. I also found myself playing other games on other systems, where no achievements were to be found ::cough Nintendo cough:: and that kind of put the whole achievement hunting subquest into perspective: do I play games for the achievements or for fun?


I mentioned in one of my previous posts that the achievement percentage doesn't tell the whole story of how you play games.

At first I was confused as to how they get that percentage number, and all I had to do was hover my mouse over it. Should've got an achievement for that...

So now I know that my current 37% completion average is across 40 different games where I have got an achievement. That explains why it went down: when I was at 38% it was across 39 games.

Unlocking a new game changes the score, so depending on what I've played it'll go up or down.

Naturally, my mind wanders towards the idea of getting 100% completion. And right away I think about two things: 1) if I do get 100%, it'll never stay that way 2) Team Fortress 2.

Let's start with the second point: TF2 has 513 achievements. This ain't the Xbox 360. Games on Steam can have as many achievements as they want, and Valve has taken full advantage with the (now) free to play shooter.

Civ V, which is a game I got for free thanks to a GOG promotion but haven't played yet, has 287 achievements.

Games like these that have massive achievement lists throw the whole average game completion statistic out the window. Achieving 100% in either game is drastically different from achieving 100% in say, Limbo or DeathSpank.

So even when you 100% a game, that doesn't tell the whole story. Yeah it would be impressive to have a 100% statistic, but someone could easily own 500 games on Steam, only play 5 that have achievements, and earn a 100% percentage mark on their profile.

Which brings me to my first point: even if somehow, someway, I achieved 100% in the 40 games that already count towards my percentage, as soon as I play a new game, whether it has 10 or 100 achievements, it'll disrupt my average.

When I think 100%, I think "complete". Something that you don't have to work on anymore because you've done it all. That's possible for an individual game, but for a percentage that covers your entire library now and forever: it's an impossible and unrealistic goal to try and achieve. I can only imagine it will end with me descending into madness.


I'm still going to try to raise my percentage up, even though I know that number is meaningless.

It's the same as the Xbox gamerscore; it doesn't paint the full picture and can also be deceiving. Just because someone has a high Steam percentage, doesn't mean it applies to all their games in their account, only the ones they've played. It's also how someone can boost their gamerscore by playing simple games for the achievements.

I don't want to pad my achievement percentage, even if I know it means nothing. There's still something about equating a high number with progress. When I look at 37%, I feel a little bad about it. If that number was say, 85%, I would feel much happier.

I know I play games for fun, that's my number one priority. Sure I've gotten sidetrack with achievement hunting for the sake of achievements before, but I always come back to the games because I love to play them.

Achievements should be a positive side effect of playing games. But I think instead of using it as a definitive guide to how I'm playing my games, instead I want to use it as a supplemental stat tracking tool.

Achievements may not be all that important to how I play games at the end of the day, but it does help me stay focus and give me short term goals that can lead into long term progress.

The end goal isn't to have a 100% completion. The end goal is to keep adding to my score habitually, so that I reach a point in my life where I stop neglecting my games, and I don't feel weighed down by future purchases.

If I focus on the short term, and keep knocking out achievements and playing my games, ideally I reach a point where I don't feel like I'm playing catch up with my games, which is how I've felt for the past few years.

I had an Xbox 360 since the beginning, and I never broke 50,000 gamerscore, which kind of brings me down. My first Steam purchase was in 2009. So yeah seeing 37% almost six years later gets to me.

But that's okay. Those numbers don't tell the whole picture. In the almost 10 years I've gotten the 360, a lot has happened in my life. My current gamerscore does paint that picture, nor does my Steam completion percentage with how long I've actually played games on Steam.

For now, the Steam achievements will be a motivator. PLAY MY GAMES is really what they're yelling at me, not that it has to be 100%.

Hopefully, two months from now, I won't have to worry too much about this.