My Steam wishlist: Games for the sake of games 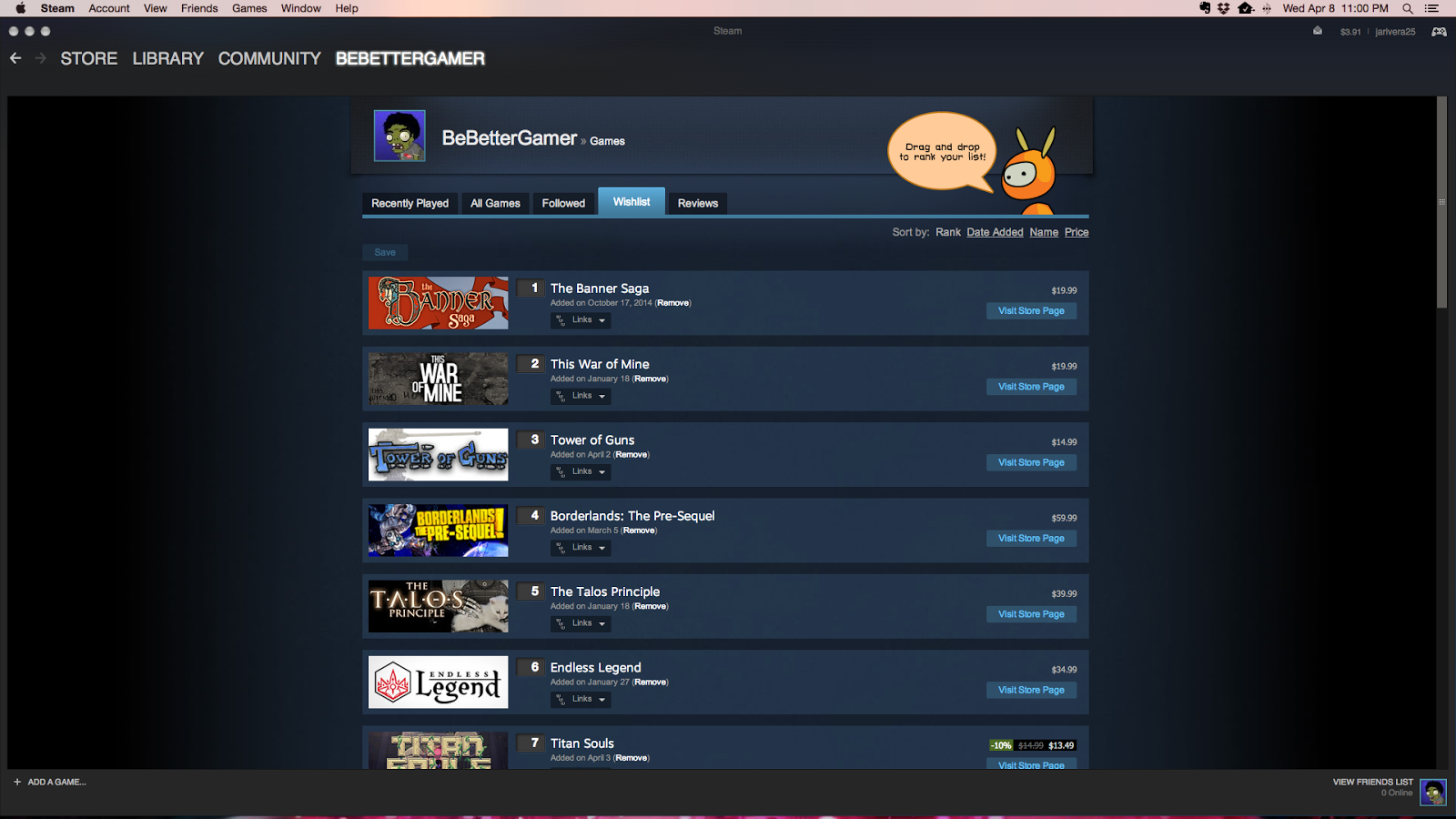 It's Steam week on the howtobeabettergamer blog, apparently. I'm fine with that, considering I haven't written anything consistently on here for a very long time. My inspiration to write after a several month hiatus, is the impending Steam Summer Sale.

I'm kind of scared about it honestly. It'll be here before you know it. You'll be sitting at your computing watching Twitch or Snapchatting with your friends when "OMG FLASH SALE LOOK OUT HIDE YOUR WALLETS!"

Memes will cover every gaming site about how you only realize you have a game when you try to buy it on sale, or how you'll dive like Scrooge McDuck into a seemingly endless pile of unplayed digital downloads.

It's the latter that terrifies me more than the former, so I'm trying to take action by writing about how I'm going to prepare for the Steam sale by playing some of those unplayed games sitting in my collection, so that I have some peace of mind going into the Summer Sale.

It's been very therapeutic to write about this. What's helped the most so far was narrowing down the games I should play in these two months while I wait for the sale. I managed to reveal a nice round number of 60 games that I can play, and not worry about my entire collection consuming my frail mind.

But what about when D-Day comes? When the Steam ships arrive on my beachfront, what games will I open my heart (and Steam wallet) to and let join my collection? And what games will I beat back with a lit torch like the Ring Wraith that's out for my soul?

My wishlist is in a endless state of flux. I'm always adding and deleting games, sometimes with no real emotional investment behind it. Most of the time it all depends on the mood I'm in.

I visit my wishlist randomly and sometimes curate it for several days straight, before neglecting it for a random amount of months. It's like my town in Animal Crossing. Or this blog. There are days, sometimes weeks where I'm constantly checking in, poking around the Steam store to see what I could add, then suddenly losing interest and neglecting it until an article about a game has me adding it to my list.

Most of the games I add are on impulse. Such and such game site will say a game is great, so I'll add it to the list, almost like a placeholder, like I'm going to do more research about it later. A lot of the times when I revisit my list after a while, I end up deleting games I no longer have an affinity for, or can't remember why I added it in the first place.

What I get is a list that has no direction, no focus, and maybe will have one or two games that I really care about playing. Everything else is just there because of hearsay, and I don't know if that's a bad thing or not.


THAT GAME LOOKS GOOD, I GUESS


When I first got Steam (since I'm on a Mac it took a while) I couldn't take advantage of it because my computer at the time couldn't support most games. It wasn't until about two years ago I got a really good Mac that could play most games available for it.

Fortunately, Mac support is still limited enough that most of the Steam catalog isn't available. I see this as a positive, because it keeps me from getting overwhelmed by the possibilities of what I can buy and probably has prevented me from spending more money than I already have.

At first I would add games to my wishlist that I could only play on my Mac. If it was available on my 360 than I would get it for that instead.

After a while that mindset shifted, mainly because I was running out of space on my 360 hard drive and the Steam client has improved dramatically over the years with features you can't get elsewhere.

Since I had a great Mac that could run pretty much anything I wanted, my buying habits reflected that, then I started getting sad because I was buying more than playing. To compensate, I just started adding anything and everything to my wishlist.

More games were being made available for the Mac, and it seemed like everything that was coming out was a must have and must own. So if someone raved about a game on a website I would check to see if it was Mac compatible on Steam and add it to the wishlist, and wait for a sale.

At first this happened rarely, but now pretty much anything worth playing falls into that category, and my wishlist looked more cluttered than my catalog of games I actually owned.

So when those mega Steam sales came around, and EVERYTHING on my wishlist had that green bar next to their price, I didn't know what to get. I was at a mental Steam impasse, and would become so overwhelmed with the options I had created for myself I wouldn't buy anything, in fear of adding to my growing list of never played games.


STEAM KNOWS THAT I KNOW THAT IT KNOWS


Recently Steam has added user views, curators, and your own personal queue to help sort through the seemingly endless content available to play. It has helped me a lot actually, because it guides me towards games that are similar to games I have in my library.

What it also does is suggest games based on your playtime as well. Which sounds super helpful and informative, but I don't think my account has benefited much because I don't have a lot of playtime on many of my games.

If I achieve my initial goal of bringing up my percentage and getting into more of a rhythm to play my Steam games before the Summer Sale, hopefully that will help improve my recommendations based around playtime.

What these curation tools have done to help me the most is making me realize I should stop adding games to my wishlist.

I've gotten to a point in my Steam queue where they are recommending games "because they are popular" or to see how I would respond with it in my queue. It literally asked me a few times something like, "just testing the waters here, no big deal".

I think I've gotten to that point with my Steam queue because really I have everything worth playing either a)in my library or b)in my wishlist. If I start adding anything more it really is because it's popular or just cause.


NOTHING TO WORRY ABOUT


I think I'm pretty comfortable with everything that is currently on my Steam wishlist. I would like to say I'm going to freeze my Steam wishlist as is until the Summer sale, but who knows maybe a game will be added that I really want to play, or an older game finally gets Mac compatibility (I'm looking at you Papo & Yo).

Currently I have 23 games on my wishlist. That's a lot. But at least it's less than half of 60, right?

Now, I think I did a pretty good job of removing those "impulse" games. I also removed any game that didn't have Steam achievements because I want to keep the momentum of building my percentage up after the Sale. But I do have to admit there are some games that stayed because even though I'm not 100% crazy about them, they still look interesting and like something I would get a kick out of playing. Does that make them my first choice? No, but hey if the Steam Summer Sale is lacking on deals for the games I do want, maybe I'll pick up those games and be pleasantly surprised if I end up falling in love with them.

Steam let's you rank your games on the wishlist, which honestly I don't like to do. I know what games I would prefer to have over the other, but that's like saying I'd prefer to have a banana over an orange. Doesn't really make a difference, and I don't like one that much more than the other.

Except Arkham Knight. I really want Arkham Knight and I'm excited they're bringing it to the Mac. Although that's going to be in the Fall, so that'll probably be a Holiday Sale purchase.

What it all really comes down to are the deals that end up being made available when the Summer Sale hits. Like many who have lived through these mega sales, the majority of my purchases come from the daily specials and flash sales, which is where the biggest discounts occur. On the last day I look at everything that wasn't offered as a daily deal or flash sale, and decide if the discount is still worth it.

Just because there are 23 games on my wishlist, doesn't mean I have to buy 23 games. I know that. My fear going into these mega sales though is that if I buy just one game, will I ever play it? And I don't ever buy just one, I usually by 5 or 6.

I know it's only two months, but I'm trying to stay positive that two months of me actively trying to play my games, will remove that negative connotation that comes with buying games from a mega sale.

There really shouldn't be any hesitation when it comes to buying video games. I mean, talk about a first world problem right? Here I am, getting anxious about if I'm going to play a game that's probably loaded with content and can give me many hours of fun, at a crazy price that is realistically absurd to be available at, and I'm nervous about it.

I have to think more positively about when I add a game to my wishlist, so that I can stay positive when it comes time to purchase it. And I have to get back to basics for that to happen. I have to play my games.