Let's not forgot about the Humble Indie Bundles 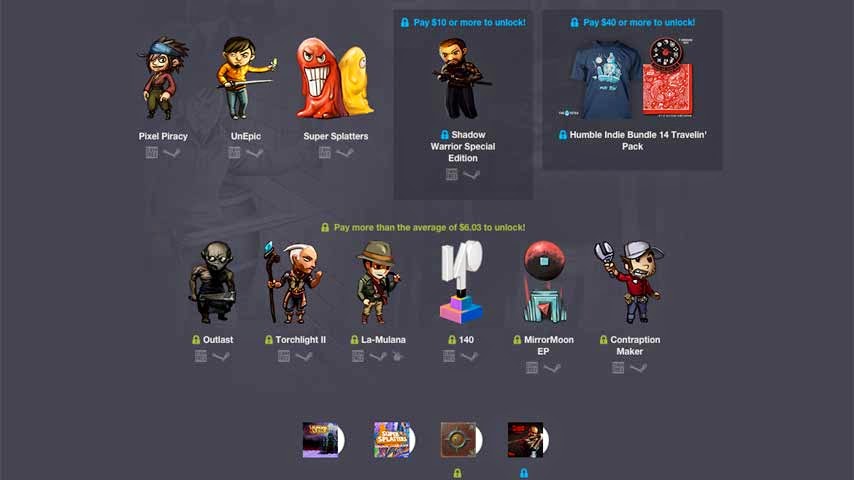 As I'm writing this, the 14th Humble Indie Bundle will end in under two hours. I mentioned briefly in my previous posts about the upcoming Steam Summer Sale, that I have a large amount of games in my Steam account from the Humble Bundles.

A lot of those purchases were impulse buys, and whereas I only wanted two or three of the games I ended up with more than I could handle. Looking back on it I've come to realize that a few of those games might never, ever, get played.

I also mentioned that I'm going to be more conscience of this when it comes to future indie bundles, and try not to buy eight games when I only want one. Chances are, that one game will go on sale another time through their store or on Steam, and I can buy it then.

All this inner dialogue manifested into blog form, was so I could be aware of impulsively buying Humble Indie Bundle's and how it negatively affects my Steam library by: adding to my never ending backlog, lowering my Steam percentage, and creating an unrealistic view of what my library means to me.

In the future, I said to myself, I won't impulsively buy a Humble Bundle unless I want ALL the games. I said this to myself a few days ago.

Last night, I bought the 14th Humble Indie Bundle. I paid $10, so I could acquire every game offered.

I only really wanted TWO games.  I did what I told myself I wasn't going to do.

Do I have a problem? Is there something wrong with me?

Let's talk about it.


There's no denying the value of these Humble Bundles. I mean, they're PAY WHAT YOU WANT CAN. You can literally spend a penny, and get a few games.

When the bundle first came out, there wasn't specific pricing tiers like how it is now. You paid one price, and you got all five or six games advertised.

After a while they started adding unlocks and bonuses as incentive to pay more. Three or four games would make the actual bundle, while the rest of the games became available if you paid more than the average or a certain dollar amount.

Even with the added tiers, the savings is still there. For Humble Indie Bundle 14, the most you had to pay was $10 to get all ten games being offered.

I come from an era where newly released Super Nintendo games went as high as $80 at Toys R Us.

To see 10 games that are full length, have hundreds of hours between them, and are critically acclaimed offered for $10?!? It's hard not to click that paypal button.

There's a lot of other upsides too: you can control how your money is split, between the Humble people, charity, or developers. All the games are DRM free, and come with Steam unlock codes as well. Recently they've added soundtracks to these deals, and this one in particular had four.

What's the downside? Honestly there isn't, unless you think like I do.


So now I have ten new games. Two of which I could probably make the argument I really wanted, but honestly none of these were on my radar as must have or own games.

Don't get me wrong: they all look like really fun to play, and most if not all has something about it that interests me.

What I like about these bundles is they always have a few games that are making their debut on Mac, and several of these do.

It's a pretty good lineup, but now I have ten new games that I'm already worrying about when/how I'm going to play them.

I've been writing a lot about trying to play my games in my Steam library before the Summer Sale, because I know I'm going to buy something then. But I don't want those new games to just sit in my catalog for months, possibly years, unplayed.

A bulk of the 103 games already in my Steam account are unplayed, and I don't want to keep adding to that number. I've been writing about what I can do to help me focus and start playing my games, and one of the decisions I made was to focus on games that have achievements, so that I have some visual feedback that is telling me I am playing my games.

I know achievements are unnecessary, but it's a goal I can set for myself that feels tangible and is easy to see if I'm working on it or not. If I don't keep track of my gaming habits, I'm always going to feel like I'm not playing my games, or at least have an understanding of the time I do spend on gaming.

So how did I justify this purchase last night, despite all these recent blog posts?


Last night I saw a tweet from somewhere reminding me about the Humble Bundle ending soon. I checked the site again, crunched the numbers, and decided I was going to buy it. And I felt good.

I didn't feel ashamed. I didn't immediately regret that decision or beat myself up telling myself I'm never going to play these games. Instead I remained surprisingly positive. Somewhere inside me, I had this feeling that, "Yes! These games look great, I saved a ton of money down the line, and I can't wait to start playing them!"

I honestly haven't felt that way in a long time about a lot of my video game purchases. I wrote a while back about everything I bought for the Wii U last year, and even when I got the Mario Kart 8 bundle I had this feeling of dread that I wasn't ever going to get around playing it.

But it wasn't like that last night. I bought the bundle, felt really good about it, and then I started playing LEGO Marvel Superheroes, a game that I started playing in my attempts to raise my Steam percentage before the Summer Sale.

I'm having a lot of fun playing Marvel. Even though I just bought ten new games, I didn't feel pressured about installing them or playing them right away. I didn't have this image of more games being tossed on a sack of games collecting dust floating around in my head while I played.

I am loving the heck out of LEGO Marvel, and I played it until I went to bed, like I have been doing for the past few nights. Even though the purpose of me playing it is to bring up my Steam percentage, the actual point of all this is to stop worrying and play my games.

There is a lot of fucked up shit happening in the world. When I used to game as a kid, a lot of it was to escape from the horrors of the real world, both within my own life and outside. I'm not saying that's the only reason why I gamed, but it was definitely one of the things that brought me the most happiness growing up, and helped me deal with those issues.

Now I have two smart and beautiful daughters and a loving wife, and my life is pretty good. The world around me is still fucked up, as much as it was as when I was kid. The only difference now is I am hyper aware of it, since I have two kids I'm trying to raise in this world.

Gaming still brings me a lot of happiness. That has never changed. Even when times were good I still played games; it's been the one constant of my life and my passion for it only seems to grow day by day.

I don't know when I started getting very anxious about my gaming habits having a negative effect on my life. A lot of it revolved around spending too much money during moments I didn't have time to invest to play them.

But now, I really feel like I'm at a point where I'm getting a lot of that time back. Last year I was still complaining about not having enough time to play games, and doubting my Wii U purchases because I didn't have any time to play them.

Meanwhile, almost a year later, every single one of my Wii U games I've beaten, some even 100%. I also competed in a local tournament for Super Smash Bros for Wii U, and won. An achievement I don't think would have been possible, if it wasn't for the two hours of playing For Glory every night in the weeks leading up to the competition.

I started playing LEGO Marvel a few days ago, and already have about half the achievements done for it, and will probably have it 100% by sometime this month. I am feeling more confident this time around then I did last year about playing my games. By the time the Steam Summer Sale rolls around, I will be thinking about my Steam library more positively.

I want to be happy about playing my games, and even more so when buying them. I don't want to regret every purchase, especially when I 'm getting ten games valued over $100 for $10. That's insane!

We live in a great age of gaming, and I should be happy that my biggest problem I face every night, is what game I should play. There are a lot of people in the world right now, where they don't get to ask that question, and have to deal with some serious shit.

I bought ten games for $10. Why did I ever think this was a bad thing? I will be more than happy to take advantage of the Humble Bundles in the future, and not feel ashamed about it.
Posted by Jose Rivera at 10:56 AM